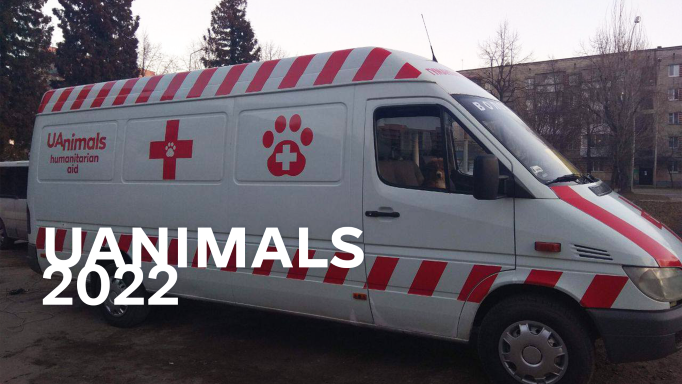 When you save someone’s life, you never think about thanks or numbers – only about the fact that you need to evacuate animals right here and now, bring them fodder or medicines or transfer funds for buying medical drugs, feed or pay for their treatment. Since February 24, we are all cogs in the same machine called “Victory”. The military, volunteers and caring people literally snatch innocent lives from the hands of death.

And now, having summarized everything done during this time, we understand how extensive the work of everyone turned out to be: the people who wrote to us about the fact that here and there, on the front line or elsewhere, there are abandoned animals dying – they called on our team for help. And then we coordinated, informed, looked for funds, evacuated, supported people in need, unloaded humanitarian goods or carried out their distribution 24/7.

Almost a year of pain, loss, but also hope, gains, caring for loved ones and helping the needy. The path that we’ve all traveled was difficult, but looking back, we understand that it was all for a reason. Ukrainians’ motivation to win is insane and we will definitely win!

What we did this year:

🐾 provided all regions of Ukraine with fodder;

🐾 126 465 animals were fed, including wild and domestic animals;

🐾 177 987 animals were given financial assistance;

🐾 7 460 animals were neutered in 41 settlements of Ukraine, including temporarily occupied territories;

🐾 more than 400 animals were evacuated abroad;

🐾 brought 7 tons of fodder to the liberated territories of the Kharkiv and Kherson regions, as well as to the Donetsk region;

🐾 participated in the treatment of more than 120 animals across the country;

🐾 it was possible to rebuild several shelters that were affected by hostilities: the “Step to Animals” neutering center in Chernihiv, the Hostomel animal shelter. We also helped with the repair of the following establishments that suffered from enemy shelling: the Dnipropetrovsk horse farm, the “Give a Chance” shelter in Slovjansk, and the “Friend” shelter in Kramatorsk;

👩‍⚖️ our legal department sent more than 50 appeals to state institutions, about 30 reports on crimes to law enforcement agencies on the facts of cruelty to animals, about 10 petition letters, provided consultations on animal protection issues that came to the hotline, concluded more than 20 contracts with partners;

👩‍⚖️ Together with the inter-factional association “Humane State”, we registered and achieved the adoption in the first reading of the draft law on the ban on fireworks;

👩‍⚖️ together with other public activists and organizations succeeded in “freezing” draft law #8150, which would allow the breeding of geese and ducks to obtain foie gras, butchering, browning, skinning, smoking, separating parts from animals, etc. – until their heartbeat stops, as well as the mass killing of stray animals. Instead, a new draft law without controversial clauses will be developed and registered;

👩‍⚖️ supported more than a dozen vegan initiatives that provide food for our soldiers and displaced citizens;

Now let’s cover our activities since the start of the full-scale war in little more detail:

🐾 supported the Biosphere Reserve “Askania-Nova”, which is currently under enemy occupation: transferred UAH 385,620, which allowed to provide 1,000 ungulates with hay for the whole year; helped purchase 20 tons of cabbage; funds were collected for the repair of housings for wintering of 160 animals;

🐾 conducted a fundraisern for the National Natural Park “Tuzlivski Lymany”, that was shelled from the Black Sea at the beginning of the full-scale war. The park needed funds to clean the channels that connect the estuary to the sea. Water, through which sea, freshwater and amphibian animals travel, should easily flow through these channels. Previously, such channels were formed naturally, but due to the actions of the invader, this process slowed down, so now the park has to clear the waterways with the help of special equipment;

🐾 helped to purchase vitamins and mineral supplements for 23 American bison of the “Yelanetsky Steppe” NNP;

🐾 supported NNP “Halytskyi” of the Ivano-Frankivsk region and provided assistance for the construction of new quarantine enclosures for ungulates;

🐾 helped to buy 3 tons of corn for 150 wild roe deer, 100 wild boars and 200 hares that live on the territory of the “Buzky Grad” NNP of the Mykolayiv region;

🐾 supported the “Hetmanskyi” NNP in the Sumy region and provided assistance for the purchase of 4,000 tons of corn for winter feeding of 250 wild pigs and 70 roe deer that live on the territory of the park;

🐾 helped the “Hutsulshchyna” NNP, for which we bought fodder to feed 27 deer, 130 roe deer, and 10 horses of the Hutsul breed;

🐾 collected and transferred funds for the repair of the floor in the Kherson shelter for animals;

🐾 the result of the partnership with Suzirja group – the start of the reconstruction of the “Best Friend” veterinary premises and the construction of a boiler room for 1 million 700 thousand UAH;

🐾 helped with the construction of enclosures, booths, neutering boxes and a wintering center for nine shelters;

🐾 supported the NGO “Every Animal”, the vegan establishment Lviv vegan kitchen in Lviv and the vegan restaurant “loopci” in Kyiv, which prepare dinners and deliver vegan and vegetarian meals for our military;

🐾 launched a cool initiative with Animal-ID and 65 animals received their QR passport;

🐾 there was an international celebrity collaboration with the British band “Bring Me The Horizon” for a raffle of a drum skin with autographs of the stars. Profits were donated to help animals;

🐾 we have an interesting game partner – Iguverse, by playing in the application of which you can transfer earned bonuses to save animals;

🐾 the warmest and most famous cooperation with robota.ua’s partner – “Furry Employees”, thanks to which our furry employees got jobs in other companies;

🐾 thanks to cooperation with the partner MasterZoo and Visa with “Paw of Care” more than UAH 500,000 were collected for animals affected by the war;

🐾 completed a joint initiative with Uklon and Patron the dog, during which Uklon users collected UAH 330,000 for animals through the “Donate” option in the application;

🐾 launched and completed the “Preparation of shelters for winter” fundraiser in the amount of UAH 749,550 for the needs of ten shelters;

🐾 provided rescue service animals with gear and money for fuel for their trips;

🐾 together with “Silpo” launched “Psychological support from animals” on the “Silpo” hotline;

🐾 released an updated version of the composition to the tune of Mykola Leontovich “Carol of the Ecocide” together with Tina Karol and the “Dzvinochok” choir for the 100th anniversary of the world-famous song “Carol of the Bells”. The track was created as part of the #StopEcocideUkraine campaign to draw attention to Russia’s environmental crimes during the war;

🐾 founded the Oleksiy Kysylyshyn “Lion” grant and helped six shelters with their needs;

🐾 launched a new UAnimals Kids project for children to help them understand and learn how to properly care for an animal, the dos and don’ts, and how to handle different situations;

🐾 accepted the legendary rescue dog Patron into the team;

🐾 enlisted the support of Ukrainian celebrities who collected funds to help animals affected by the war;

🐾 participated in the creation of a film “Nine Lives” about volunteer-heroes ;

🐾 we were supported by world-class stars: Tom Felton – actor who played the role of Draco Malfoy in the “Harry Potter” francise, actor who portrayed Sauron in the “Lord of the Rings” trilogy, Sala Baker, American actress Kim Basinger, star Adrian Paul as Duncan MCLeod of the Highlander, and Ernie Hudson as Winston Zeddmore in “Ghostbusters”;

🐾 took part in a rally in Istanbul and Rotterdam in support of Ukraine and animals suffering from the war;

🐾 opened two photo exhibitions “Animals and war in Ukraine” in The Hague and one at the College of Veterinary Medicine at Cornell University, designed to inform the world on the tremendous suffering and survival of animals in the realities of the full-scale war in Ukraine;

🐾 as part of the international campaign #StopEcocideUkraine, held an action on Wall Street in New York, where a Russian missile “landed”, held a nativity scene in London with a call to punish Russia for committing ecocide crimes, an action in Chicago Stop ruSSia – #StopEcocideUkraine as well as individual pickets held by UAnimals activists around the world;

🐾 started a partnership with Greenpeace and Ecodia and we are working on issues of ecocide with the international organization StopEcocideInternational;

🐾 instead of the traditional New Year’s tree, the representative office of Ukraine in Washington installed a model of a Russian missile as a reminder of the conditions in which Ukrainians are forced to celebrate the holidays this year.

Separately, we would like to higlight the activities of the “Natalya Popova and UAnimals Wild Animal Rescue Center”:

🐾 funds were collected to cover the costs of the surgery for an evacuated lioness with a complicated birth, the treatment of two evacuated lion cubs who went abroad the other day, a generator for the Center and for the relocation of lions and a bear abroad;

All this work would not have been possible without the caring people who donated funds to us over these past ten months of the full-scale war, without the organizations that helped us with humanitarian goods or collaborated with us on interesting fundraising initiatives. After all, we wouldn’t have done any of this if it weren’t for our soldiers who are on guard 24/7, liberating our territories, saving lives and paving the way to victory – we are very grateful to them!

We are also grateful to each and everyone who was with us and experienced this year’s events with us. Take care of yourselves, your loved ones, take care of animals around you and follow our pages on social networks.