The Tuzlivski Lymany National Nature Park is home to many species of birds, including piscivores. 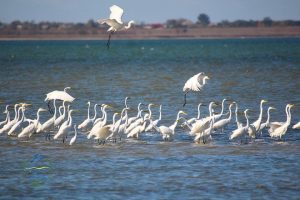 The park’s wildlife are in dire need of help now: the water exchange between the estuaries and the Black Sea must be restored. For aquatic bird species, estuaries serve as a kind of “all you can eat buffet”, and should have plenty of fish.

To achieve this, there must be straits between the estuaries and the Black Sea, which serve as migration routes for marine, freshwater and amphibian animals. Previously, such channels were formed naturally, but due to human activity, this process has slowed down, so now the park has to clear the waterways with the help of special equipment.

The park needs about 1,000 liters of fuel for machinery to form a channel in the sandbank.

The quality of our life and the well-being of future generations depend on the state of the environment. Let’s take care of our nature together! Let’s help the park raise money for fuel