Recently, a lioness from Kramatorsk has been evacuated from a private menagerie to a shelter for wild animals near Kyiv. As it turned out, the animal was pregnant. Difficulties arose during birth, so the volunteers immediately called a medical team to take the animal to a hospital. 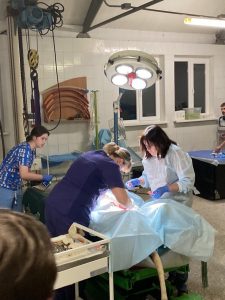 Doctors tried all they could to save the life of the lioness during two days of difficult childbirth. Unfortunately, due to their mother’s stress from shelling and explosions, the lion cubs were underdeveloped and had no chance of survival. Now the lioness is in an extremely difficult condition. Her body has experienced severe stress, a complex surgery, and now doctors are fighting for her life.

Due to these events, we are starting a fundraiser to collect UAH 31,190 which will cover the costs of the surgery and treatment of the lioness. Join the fundraiser – let’s save this beautiful animal together!