On Saturday, October 8 at 14:00 in Warsaw, UAnimals will hold a March to save animals from the war in Ukraine.

The march is designed to draw the attention of the world community to the problem of annihilation of all living things by the Russian invaders. Every day, thousands of Ukrainian animals die in terrible conditions from hunger, dehydration and injuries.

UAnimals is an all-Ukrainian animal protection movement that is engaged in rescuing animals in Ukraine. Since the beginning of the full-scale invasion, UAnimals has come to the rescue of animals affected by Russian aggression. So far, in the half a year of war, UAnimals managed to save, feed, evacuate and shelter about 200 thousand animals.

The column will proceed from the Palace of Culture and Science to the King Sigismund’s Column – a monument to King Sigismund III on the square in front of the Royal Palace.

Link to the event.

We invite you to join the march and spread the word to help protect war-affected animals. 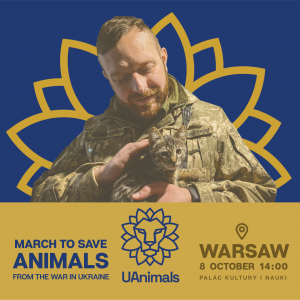