Olena Bubenko is one of heroic Ukrainian women who survived the occupation, and did not leave the abandoned animals of her village of Ruski Tyshky in the Kharkiv region to their fate. Before the full-scale war, the woman had her own yard, where some 57 dogs, 40 cats and 23 goats used to live. The animals had everything they needed: tasty feed, a roof over their heads, medicines, and they were also neutered. However, when the invaders came, Olena’s house and everything in the yard burned down from an enemy shell. Furthermore, unfortunately, some animals did not survive that attack. 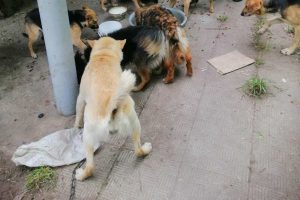 Olena and her wards began to hide from the shelling in the basement of her house. At the same time, more and more abandoned pets turned up, because people kept evacuating from the village. Neighbors helped Olena as much as they could. One man even gave his gazebo for her animals, where 53 dogs and 75 cats stay during the day, and at night the pets hide in the warm basement.

Therefore, we are launching a fundraiser for buying 20 kennels for Olena’s 40 dogs, who are currently living outside and risk freezing during the upcoming difficult winter. 15 animals are large, the rest are medium-sized or small. The required amount is UAH 120,000. Join in helping animals – they too suffer from the cold and want to be warm in the cold season!