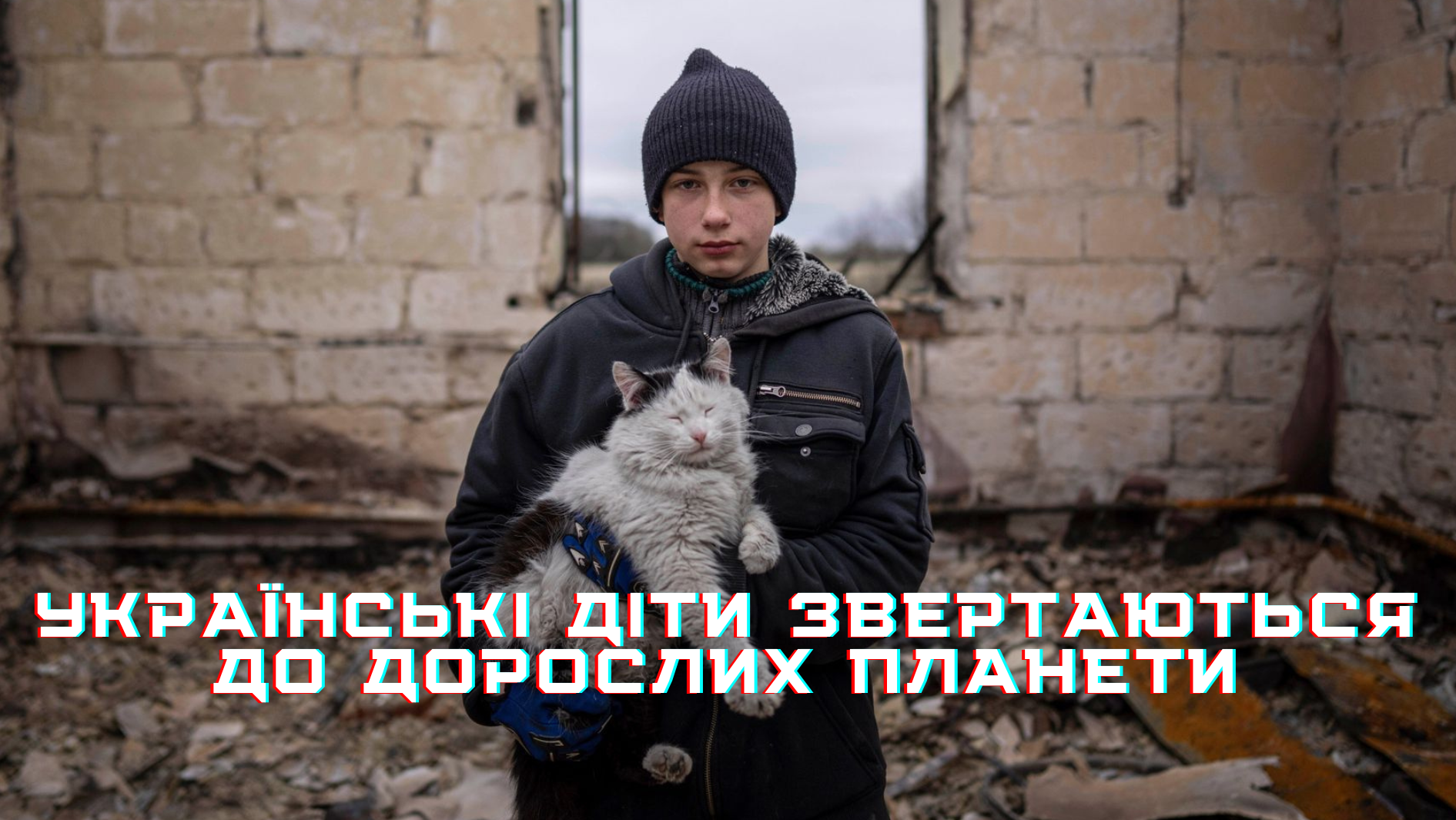 By killing children and destroying the environment, the Russian army is declaring war on the future of the entire world. Therefore, together with UAnimals, world leaders are addressed by those to whom the future belongs – children. Directly from the bomb shelter, under the fire of Russian missiles and Iranian drones, Ukrainian children are reminded of the horrific damage that Russian aggression causes not only to people, but also to the environment. The children call on world leaders to punish Russia, they address everyone who cares for animals and the environment to sign an international petition.

The world needs to hear the appeal of those who had to grow up so early.
Those to whom the future belongs. Those whom Russia is trying to kill. 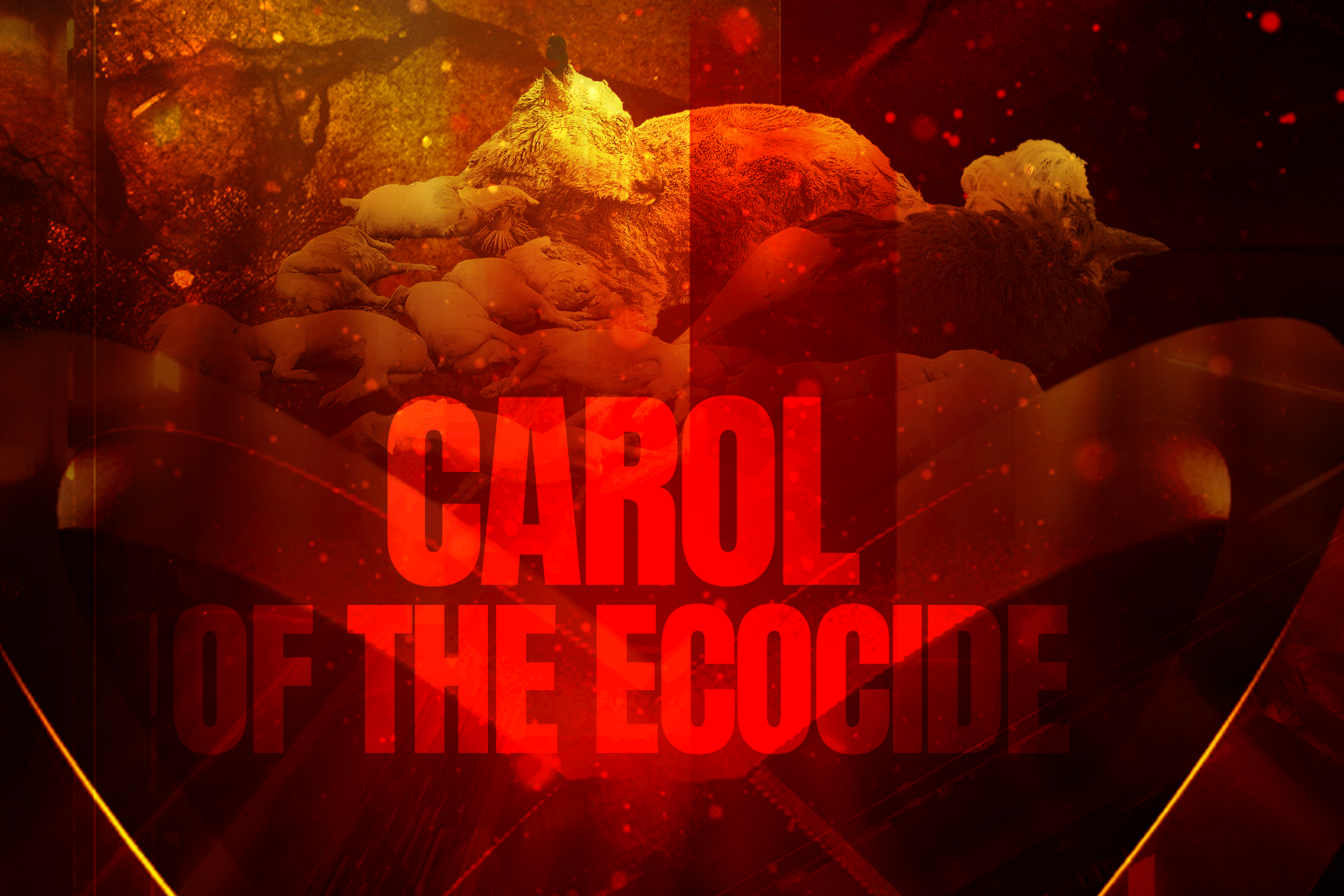 To celebrate the 100th anniversary of the world-famous song Carol of the Bells, UAnimals and Tina Karol present an updated version of the composition to the tune of Mykola Leontovych. The track was created as part of the #StopEcocideUkraine campaign to draw attention to Russia’s environmental crimes during the war. The song is performed by the singer Tina Karol, who is loved by millions, accompanied by the “Dzvinochok” choir.

“Carol of the Ecocide draws attention to the fact that Russia is not only a terrorist state, but also an ecoterrorist who steals the future from our children and the entire planet. And this is not a cute cartoon like Grinch, but pure evil that needs to be stopped before it destroys the world”, – says UAnimals founder Oleksandr Todorchuk

The new and relevant text for the composition Carol of the Ecocide was written by the Ukrainian author Yevhen Matyushenko, and the composer Yuriy Zvonar worked on the arrangement.

“War destroys life in the fullest meaning of the word: it takes people’s lives, wrecks their homes and their way of life, poisons the land, and buries people’s hopes along with the right for the pursuit of happiness. The war mercilessly destroys the Ukrainian ecology and the animal world. I joined the UAnimals initiative to remind the world of how devastating and immeasurable the consequences of Russia’s war against Ukraine are. The song “Shchedryk” is a symbol of the Christmas miracle, and Ukraine is a symbol of the human miracle of resilience and indomitability, a miracle that defends the whole world in this destructive war,” – says Tina Karol. 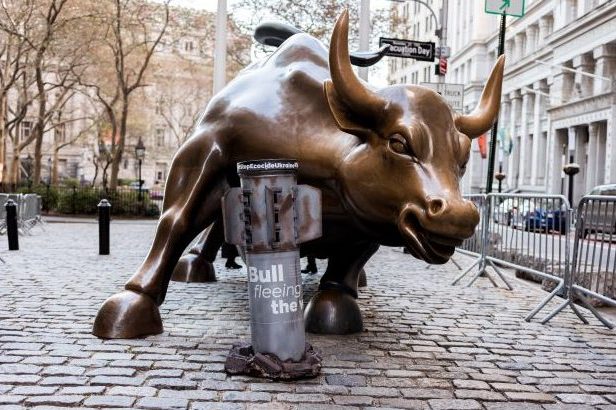 Activists of the Ukrainian organization UAnimals placed a sculpture of a Russian missile next to a furious bull on Wall Street. The pop-up installation is designed to draw attention to the ecocide that Russia is committing during the war in Ukraine.

“Through this action, we are reconsidering a popular sculpture to show that even an angry bull can turn out to be nothing more than a frightened animal running away from war,” says UAnimals founder Oleksandr Todorchuk. “During a full-scale invasion, Russia is killing not only people, but also millions of animals and the ecosystem in general. To fight this crime, we launched an international campaign #StopEcocideUkraine”.

As part of the campaign, the UAnimals organization calls on the European Parliament, the United Nations, the parliaments of partner states, international organizations and institutions to condemn Russia’s actions, to help stop environmental crimes, to introduce additional sanctions against the Russian Federation, to help restore the ecological security of Ukraine and its environment, as well as help in the restoration of the Ukrainian ecosystem during the war and in the post-war period, including by implementing the instrument of reparations. 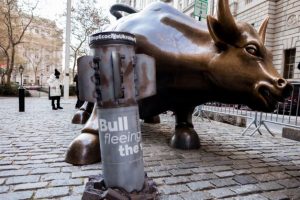 In total, during the eight months of the war, as evidenced by the data of the State Environmental Inspection of Ukraine, the aggressive actions of the Russian Armed Forces led to the fact that:

–       80,618 tons of petroleum products were burned during the shelling, which resulted in significant air pollution;

–       7,155,689 m2 of objects were destroyed, including critical infrastructure, which also caused significant damage to Ukraine’s environment.

You can take a step towards punishment of Russia for environmental crimes during the war right now by signing an international petition to the UN and the EU. 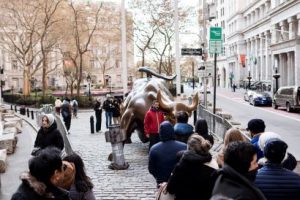 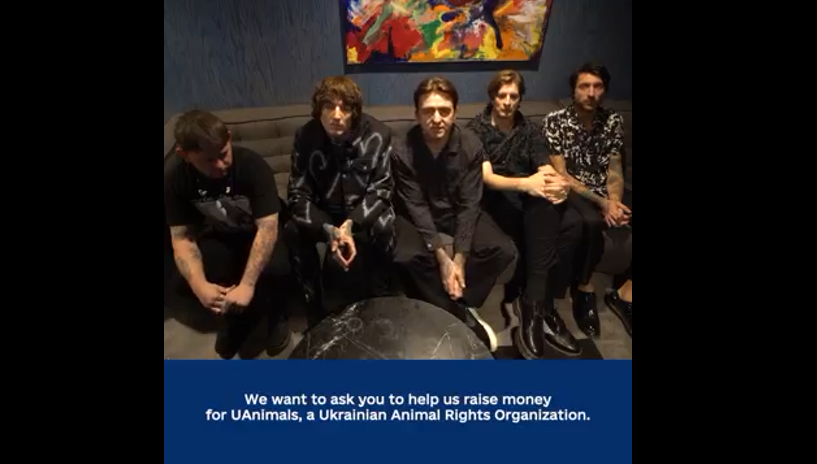 Everyone suffers from the war waged by Russia against Ukraine: both the people and the animals. Russian troops are committing ecocide, destroying all living things. A British band “Bring Me the Horizon” are animal rights ambassadors, so the issue of animal suffering in Ukraine is a personal and painful topic for them. “Right now, Ukrainians are fighting for what they love, not only for their land, but for their loved ones”, – say the musicians.
The band “Bring Me the Horizon” has supported animal rescue efforts with UAnimals and decided to raffle a drum skin with their autographs among their supporters. They will donate all the collected funds to the UAnimals fund to help animals affected by war. “While the enemy is exterminating all living things, Ukrainians are saving animals,”- said Oleksandr Todorchuk, founder of UAnimals.
For just $4, you can take part in the raffle and save a life. Fundraising is done on the website. In addition, you have the chance to win two more gift cards worth £100 or £50 to shop at Horizon Supply. Join in! Worldwide support is extremely important for Ukraine, because absolutely everyone here suffers from Russia’s armed aggression. 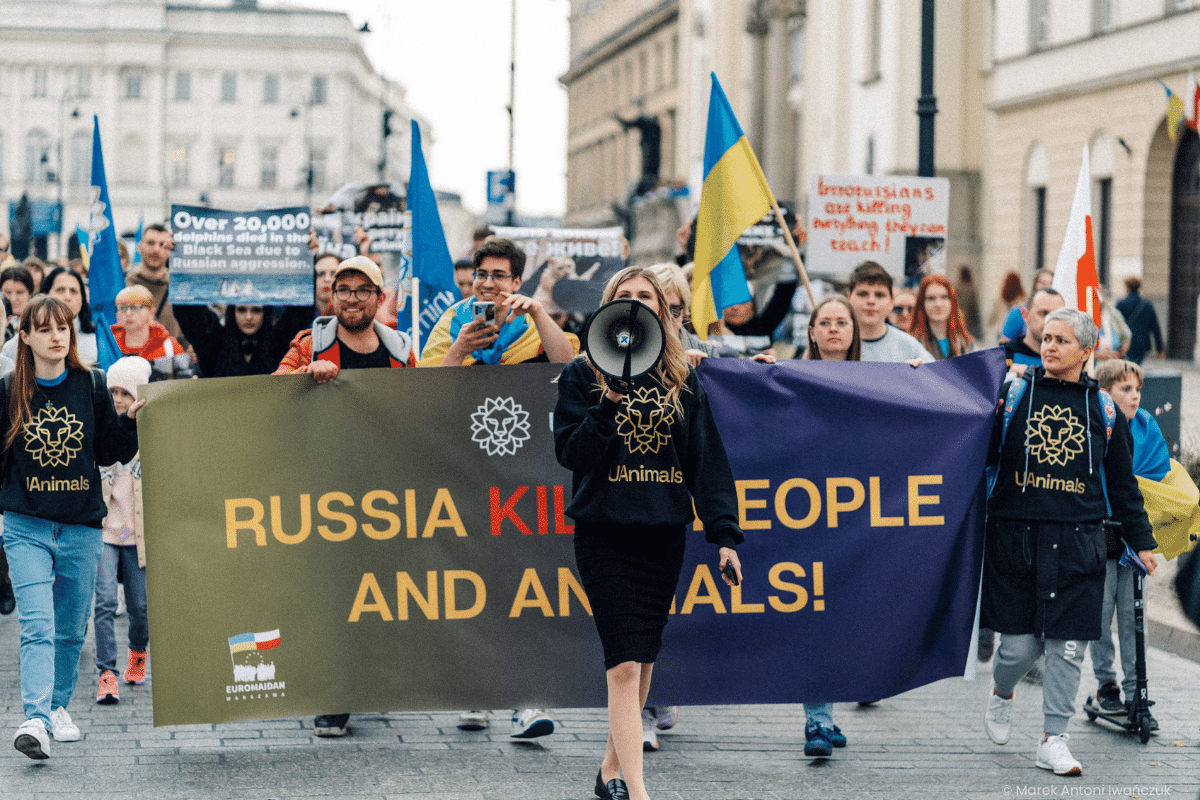 Yesterday, on October 8, UAnimals activists and all those who care about Ukraine’s animals walked through the central streets of the Polish capital to draw the world community’s attention to the mass killing of animals and ecocide committed by Russia during the war in Ukraine. 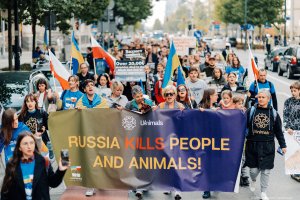 “We are not here because we don’t care about people’s suffering – no. We mourn the death of every person, child, man, woman – absolutely everyone: like those on the front line, and the ones in the rear. Everyone suffers. Today we are here because we need to save animals in Ukraine, to take action here and now”, – says Olga Chevganyuk, operational director and co-founder of UAnimals. 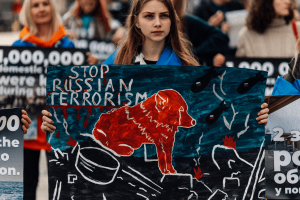 We would like to thank our partners, the Euromaidan Warsaw, and the representative Victoria Pogrebnyak for their help in organizing and holding the march, the Stacjazoo shelter, as well as all the volunteers who responded to our call for help. 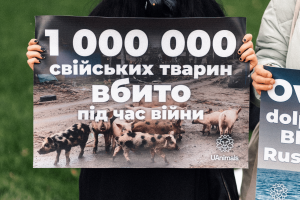 Hundreds of people, not only from Ukraine and Poland, but also from other countries joined the march. We are extremely grateful to everyone for their support. You are incredible! This is very inspiring! Together we will definitely be able to save those who need our help and protection. And we hope that next year we will be able to march through the streets of Ukraine! 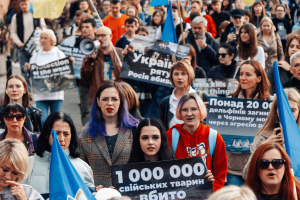 In the meantime, join our virtual march for the protection of animals, which will last until October 10. Link 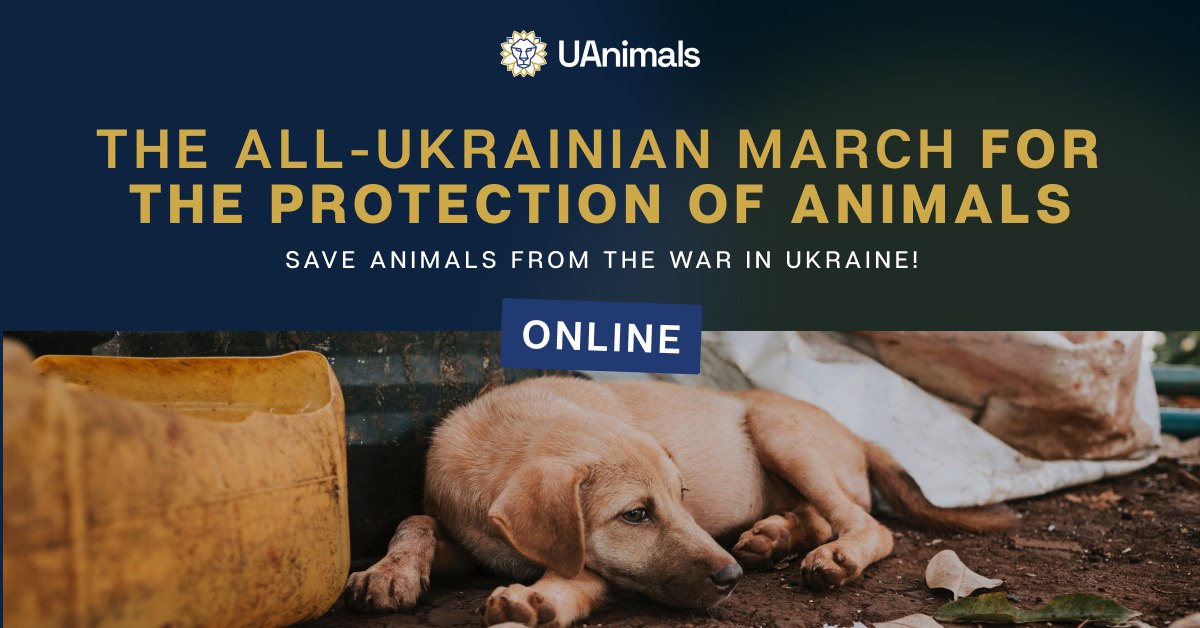 Every year, UAnimals holds the All-Ukrainian March for the Protection of Animals in dozens of Ukrainian cities. Unfortunately, this year, for security reasons, this event will not take place on the streets of populated areas of Ukraine. But UAnimals will hold it online so that the event takes place in every city and village of the country: from Mariupol to Uzhgorod and from Kyiv to Simferopol.

The march will start on October 4, World Animal Day, and will last until October 10. Join it online! Thanks to this march, UAnimals want to draw society’s attention to the ecocide committed by the Russian invaders in Ukraine, as well as to raise funds to save animals. Since the beginning of the full-scale invasion, 3 zoos and 20 shelters have come under fire from the Russian army. More than 1,000,000 wild, domestic and farm animals died in the fighting.

Join the march via the link: https://www.animalmarch.org/en/ and invite friends, acquaintances, relatives, colleagues. Let’s save animals together! 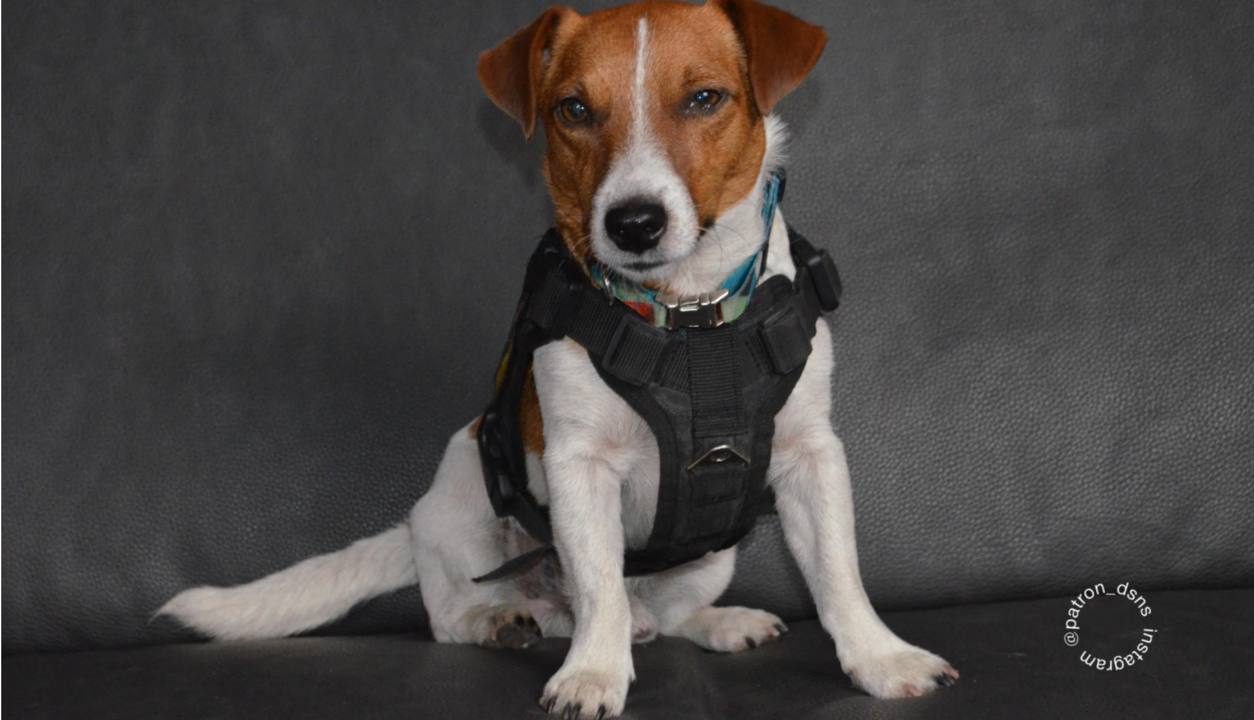 There is probably not a single person in Ukraine who has not heard of Patron – our brave rescue dog, a demining legend, the mascot of the pyrotechnics unit, the heroic favorite of Ukrainians, the one who received more than one international award and can boast the “For devoted service” medal.

We have already repeatedly interacted with the legendary dog Patron, who raffled his merch for us, and on his birthday he raised as much as UAH 261,470 for animal rescue!

We realized that Patron is no longer a volunteer of the UAnimals organization, but a full member of our team. That’s why we’re excited to announce the big news: Patron the dog will officially be the Marketing Director at UAnimals!

“It is very important to convey the importance of saving animals to Ukrainians and audiences abroad using all possible methods. And it is difficult to find an opinion leader as powerful in his messages as Patron the dog,” – says UAnimals founder Oleksandr Todorchuk.

“Bark-bark-bark!,”- confirms Patron the dog agreeing with Olexandr’s words.
Follow the updates from Patron and UAnimals on our collaboration! 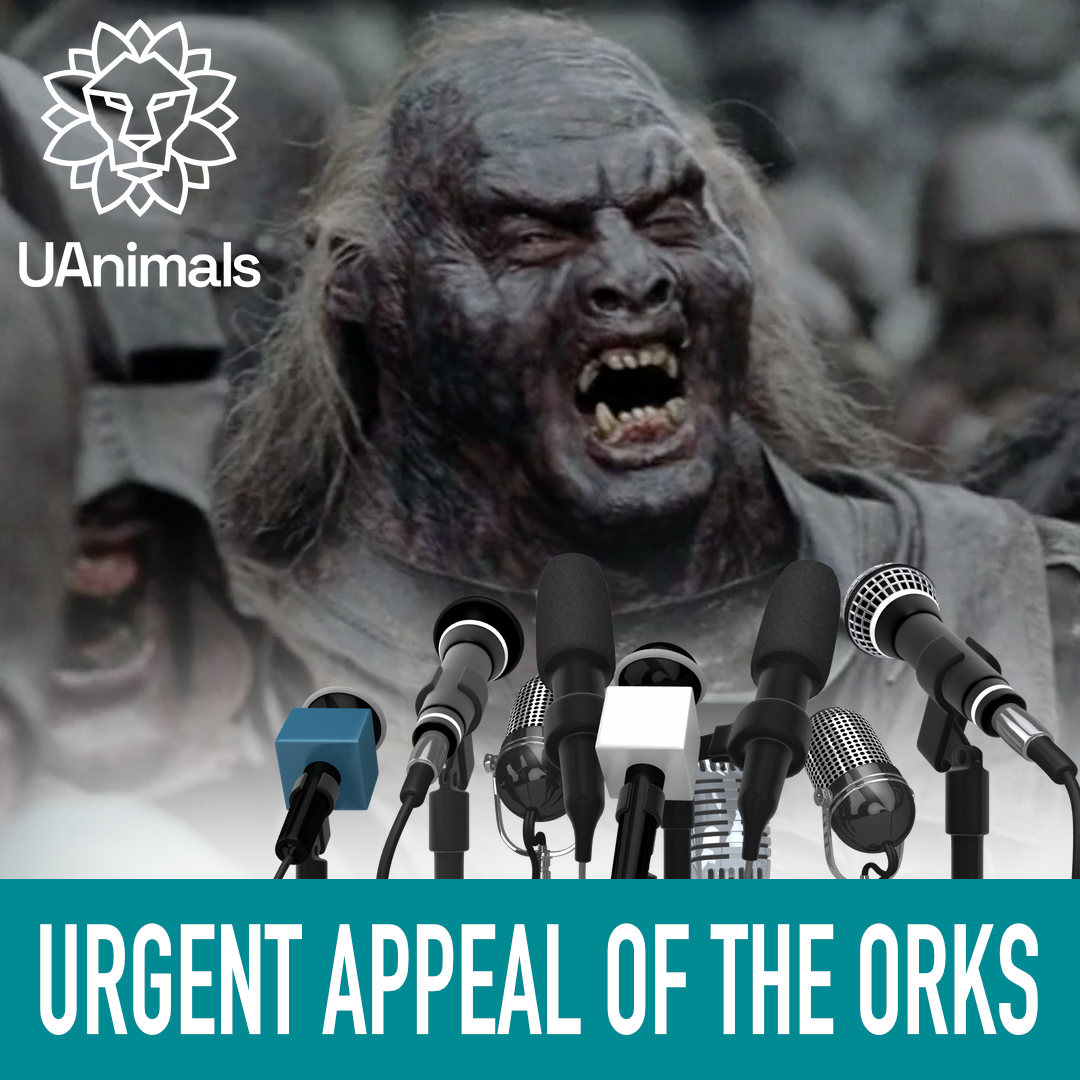 In a new UAnimals social ad, Sala Baker, the actor playing the role of Sauron in the “Lord of the Rings” trilogy, addresses Ukrainians with words of support. The actor calls to support UAnimals and save animals from war, and orcs of Middle Earth ask not to call Russians “orcs” as the comparison with Russians offends their people’s dignity. 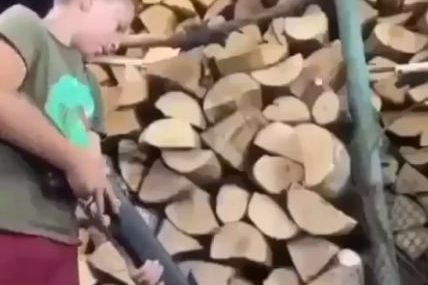 We didn’t have time to recover from the previous act of animal cruelty, the perpetrator of which was a 6-year-old girl, when we received another atrocious video.

In the village of Velikiy Bychkiv, a 12-year-old boy killed a cat for fun. He shot the wretched animal with an air gun and filmed it on camera. Later, the video got onto the Internet.

As an animal rescue community, we immediately reacted to this shocking incident and filed a lawsuit to the law enforcement authorities. Why the child had access to a weapon and decided to take the cat’s life is a question to his parents, who must answer before the law for their failed upbringing.

Unfortunately, such cases are not uncommon, and the punishment is usually a small fine, which is not enough to stop the abuse of the defenseless. We urge the law enforcement and Children’s Services to thoroughly investigate these crimes, because every life is precious and killing for fun is unacceptable.

No comments to show.